History ‘is a Greek word.  It means search, research, discovery or news  The Greeks were the first to try to define history.  The Greeks thought that history was a perfect example of the past experience of mankind and that it had a universal need and value.  According to the eminent English historian Bury, history is in fact science — nothing more or less (“History is science no less and no more”).  The fact that many pieces of information from the distant past have remained undiscovered has made the work of history, in many cases, impossible, so historian EH Carr says, “History is a huge puzzle of broken pieces with many pieces lost.”  Finding the right answer to the riddle and finding the lost pieces gives it a place in history.  Historian Henri Pirenne says: “I’m not an archaeologist, I don’t look for archeological material. I’m a historian: I look for life, I love life.”  I am talking about people, about life.

The history of human civilization can be divided into three parts, ancient clay, medieval and modern.  The range of ancient times in human history is very long.  Historians estimate that Homo sapiens, or the first modern man, came into being on Earth through a long evolution about 3.7 million years ago in the first phase of this age.  There is evidence that people lived on Indian soil at least 500,000 years ago.  In the early days of civilization, these modern people used stone tools all over the world.  Later they started using metal tools like copper, bro, iron etc.  Along with the change of tools, various changes also take place in the culture of the ancient times.  Gradually the script came into circulation.  In view of these various changes, the ancient period is divided into three periods:

Period: The period between the beginning of human culture and the end of the written material is called the ‘Pre-Historic Age’.  In a word, the period in which no written historical material is found is called the ‘prehistoric shell’.  The language was first used by Daniel Wilson in 1851. Elements of history are written by people at this time

1. Usage was not known, so there is no written description of this time.  The history of this age is based on the tools used by the people of this age, housing, pottery, household utensils, etc., that is, only on the basis of archeological material.  The pre-Harappan period was a prehistoric period as no written historical material was found before the Harappan civilization in India.  Examples include prehistoric humans, cavemen, and dinosaurs.

Proto-Historic Age refers to the period when the script was first used, but has not yet been deciphered. For example, the Harappan civilization. The script was introduced in the Harappan civilization.  Even today it is not possible to trace the origins of the Harappan civilization.  There are some problems with the division of eras in India based on the use of metals. The use of metals in India has not changed uniformly in all parts of India.  That is to say, the Stone Age, the Crown and the Iron Age came one after the other in northern India, but the Iron Age came after the Stone Age in South India.  There was no separate Bronze Age in India.  Here copper and bronze metals are used simultaneously.

1. The invention of chronology and the existence of written descriptions are considered to be the beginning of a ‘historical era’.  From this it can be said that the script or the alphabet did not appear at the same time in all the countries of the world and as a result the ‘historical era’ did not begin at the same time everywhere.  2 Examples of Egypt and Mesopotamia Scripts were introduced in Egypt, Mesopotamia, etc., around 3000 BC, and have been deciphered.  From this time onwards a fairly well-written account of the dynasties, kingdoms, and dates of these countries is available.  The example of India is that it is assumed that the Aryans had no script even though huge and unique literature was created in the age of Aryan civilization.  According to some, the Mauryan emperor Ashoka (after 260 BC) is the oldest of the ancient Indian inscriptions that have been deciphered.  So some people mark the third century BC as the beginning of the ‘historical era’ in India. Different views in the Indian context Again, many consider Sohgo’s copperplate to be the oldest script in India.  According to them, this script was written years before the birth of Ashoka.  When various Buddhist and Jain texts were written in northern India after the 6th century BC.  From them various contemporary historical information is known.  Cambridge University Professor.  Dilip Kumar Chakraborty has strongly advocated further postponing the beginning of India’s historical era from the third century BC.  He says, “It is natural that there was no script in the Gangetic valley before the third century BC.  In support of his statement, he questioned whether Panini’s grammar in the fifth century BC could have preceded the introduction of the script.  Therefore, some believe that the historical period in India began in the late sixth century BC.

Historical era in India The history of Lee decoding and the date of the year is the basis of the history of the modern era.  Due to the lack of decipherment of the inscriptions, it was not possible to compile a continuous history of the period from 3000 BC to 650 BC in India.  According to historian Vincent Smith, chronological history in northern India is known as 650 BC CC (“Definite chronological history begins about 650B.C. for northern India later in the Deccan.”  Considering the direction, the beginning of the historical era in India is from the year of Alexander’s invasion of India in 326 BC (“The carliest absolutely certain precise date is 326 BC”).

History is not a human fabrication.

He started composing historical history with suitable evidence in hand.  The Problem of Writing Prehistoric History Ancient Times: Writing history of ‘prehistoric’ and ‘almost historical’ eras is very complex and problematic.  Although some written descriptions and books are found as elements of the historical era, they are missing in the case of the previous two eras.  Essentials of Archeology: The history of prehistoric and almost historical eras depends entirely on archeology.  Although there are other important elements in the history of the historical era, archeology is essential in many cases.  However, excavations underground have uncovered many traces of ancient people, their way of life, and civilization from the unforgettable past.  Excavations at Harappa and Mohenjo-daro in India and the ancient civilizations of Sumer, Babylon, Assyria, Celtic in the Mediterranean, Egypt, and Rome in West Asia have been found.  Historians have to rely on archeology to know about prehistoric and almost historical eras.  These archeological elements are: Fo Fossils,

The climate of the whole world has changed many times since its birth.  There is ample evidence of this at different stone levels in different geological eras.  The short-lived ice age has come after the long multi-million year Ubhu era.  There are signs of four or more ice ages on Earth to this day.  The ice age has resulted in the extinction of a large part of the animal and plant species.  Fossils of many of these extinct animals and plants are scattered in various places.  These are important elements of history.  In addition, human bones, skulls, teeth, etc. also help us in writing history in many ways.  Notable in the history of human evolution are Ramapithecus found in India and Kenya, Australopithecus gingenophus found in South Africa, Peking Man of China, Heidelberg man, Neanderthal man, Rhodesian man, Cro-Magnon man. 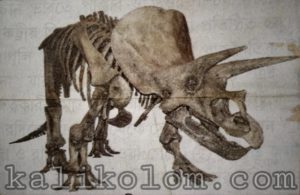 Tools and other items used by ancient people

Man-made tools and their utensils in the prehistoric era are important elements of the history of that era.

2. Ancient Stone Age In the early days of creation, people in the Stone Age used stone tools.  They used to break a small piece of stone to make it more suitable for use.  These tools were dull and uneven and their size was also huge.  In this era, the same tools were used to cut meat, cut wood and hunt.  These were called ‘hand-axes’.  In addition there were stones

Knives, paints, arrowheads, wood and stone piercing machines, etc.  Middle Stone Age: Improvements are evident in the stone tools of the Middle Stone Age.  One of its features is smallness.  Towards the end of this era, people started farming and pottery.  Neolithic Age: The tools of the Neolithic Age were much smoother, sharper, and more usable.  It was during this period that new grain sowing and digging machines were made.  The scythe is made for harvesting.  L. Hamandista, Shilnora, Janta etc.  In this era agriculture and animal husbandry are much more advanced.  People began to build permanent settlements.

3. Copper-Stone Age: People started using copper after the Neolithic Age.  Over time, tin metals were mixed with copper to form an alloy called broo.  In India, it is not possible to draw a line between the Neolithic Age and the Metal Age, because with the use of copper and bronze, people also started using stone.  Hence this age is called ‘Chalcolithic Age’ Iron Age: then comes ‘Iron Age’.  Much of human civilization is known from the tools and materials used by the people of this age.  These are valuable elements of the history of this era.

4. Pottery (The discovery of the potter’s wheel in the Neolithic Age revolutionized pottery. Pottery of various colors and shapes began to be made. Many times marks or images were drawn with bones, sticks or nails.  Clay statues, stone bowls, beads, pendants, oyster garlands, etc., have been discovered.

The ruins of many prehistoric cemeteries, houses, buildings and shrines have been discovered.

2. Pyramid: At that time people believed that death is not the end of life – there is life after death.  With this idea, every corpse was left with its necessities, tools, ornaments, food, drink and even its favorite animal.  The same can be said about the pyramids of Egypt.  The pyramid is the tomb of the kings of Egypt.  About forty such pyramids have been found near the Nile near the capital, Cairo.  These are the tombs of the kings or emperors of Egypt.  The body of the dead king was left there as a mummy.  These are important elements of history.

3. Shrines: Apart from tombs and pyramids, the ruins of houses and shrines found in different parts of the world are important elements of history.  In ancient Sumer there was one city-god in each city and one huge temple in each city.  These are called ‘Jigurat‘.  Each ‘jigurat’ was like a fortress everything from a grain field to an arsenal, a storehouse of rice.  Their importance as elements of history is undeniable.  The elements of history are scattered all over the world.  Fossils of ancient people, caves, cave paintings যেমন such as these

such as scripts, coins, and scriptures, literary texts, 5 foreign accounts, and 6 official documents — these are also important to historians.  These are called written forms of history.

Currency and its importance

The study of currency is called ‘Numismatics’.  The importance of money as an element of ancient history is undeniable.